Club Championship and Senior Club Championship
This is two-day gross score tournament. Participants must play both days. Scores will be posted as a tournament score (also called a “T” score). To be eligible to play in the Club Championship tournament, a member must have played and posted ten (10) SBRWGA League day events within the prior 12 months of the tournament entry date. The SBRWGA President may make exceptions to this requirement in extraordinary circumstances.
To qualify to compete in the “Senior Club Championship” award category, a player must be 70 years of age or older on the tournament date. Members meeting the qualifying age can compete in both categories but can only be awarded a win in one category.  Everyone in the field will be placed in the appropriate handicap flight and will compete for prizes within their flights.
Club Championship 2021
Proudly sponsored by Hardin Brothers Automotive
November 15 & 16, 2021 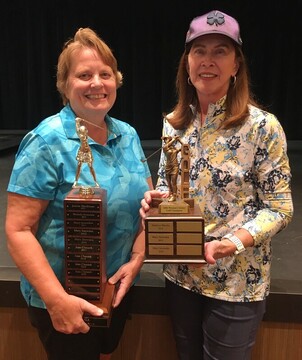