This page is dedicated to the founding members of the SBRWGA, all past presidents, board of directors and league members. Thank you for your support, guidance, and vision.

​2021
2021 brought the long awaited COVID vaccine which resulted in decreased cases and less severity of the disease.  A welcome relief for the healthcare system!  As a result, we were able to resume our lives….at least somewhat!

The Ranch House Grill suffered great staffing shortages due to Covid resulting in curtailing all catering.  They did allow us to bring in food from outside vendors toward the end of the year so we were able to have a few luncheons.

​In April the decision was made to resurface our greens this year.  Our greens had reached their life expectancy and were in pretty sad shape.  This was a huge investment by Robson and we are grateful they were willing to undertake this huge project.  As a result, we had temporary greens for six months to allow for construction of new greens.  Not ideal, but at least they kept the course open for us!  We made arrangements to play as guests of MountainView Preserve WGA one Tuesday each month during the summer.  It was really fun to get to know the other ladies and play different courses too.  We continued to have weekly league days with games here throughout the summer as well.

2020
Lions, tigers and COVID OH MY!!  Toilet paper was more valuable than jewelry and hand sanitizer was priceless.  Governor Ducey implemented Stay at Home effective the first of April but, thankfully, deemed golf courses as essential.  Lots of changes had to be implemented to ensure our safety.
In June we were able to resume playing games and somewhat returned to normal.  Still no luncheons or gathering, but getting there.

Despite the challenges, our club continued to grow.  In late August we welcomed our 100th member, Michelle Madgar.  She was recognized at our General Meeting held via Zoom.
When the course re-opened after overseed, we were finally able to schedule our make-up tournaments and had a few luncheons too!

2019
As SBRWGA continues to grow, the league welcomed many new members this year, we now stand at 94 lady golfers. The largest number  seen since the club's inception.  It's hard to imagine that a mere 13 members started our club back in 2011 and we are all very grateful to those ladies who had the vision for our league.

With the support of The Robson Communities, we held the Inaugural Member-Guest tournament in April which was a huge success.  We had fun competing in putting contests, closets to the pin, and even a fun scavenger hunt.

The new gold tees were added and many of us enjoyed playing from a different perspective, a bit more forward but still quite challenging.
SBRWGA joined forces with SBRMGA to honor the hard-working members of our golf course maintenance crew by awarding gifts and serving pizza and homemade baked goods holiday party, it was a hit!

2018
We continued to expand the tournament and event schedule where we added a very special designation to the Club Champion tournament:  Senior Champion in honor of our members who are 70 years of age or better.

Our first annual "Mixed Sticks" event was held in conjunction with the SBRMGA. Red and Blue teams compete and then enjoy a wonderful luncheon to toast the winners.

We hosted the Robson Challenge here at SBR and we proudly took home the the first place trophy, we know how to handle the wind!
SBR, SBRWGA and SBRMGA came together to form the new Greens Committee to help facilitate communication and improve the golf experience for all of us.

Later in the year, we held a very unusual celebration at hole #15 where we christened the new restroom facility; we dubbed it our "Potty Party".  We enjoyed a champagne toast as we admired our new pit stop.

Lastly, SBR opened the much-anticipated “Ranch House Grill” where we enjoy many events in the ballroom, restaurant, and the cozy outdoor patio.  The Ryder Cup was changed to the Solheim Cup and we selected Pink and Red as our official Solheim team colors.

2017
Our league day committee introduced us to a new software program, Golf Genius which greatly simplified the process of league management and automates the scorecards. The Ryder Cup Captains were Cheri Alfrey and Marlyce Mycka.

2016
The year started off on a positive note with the opening of the new SBR Pro Shop.  On November 15, 2016,  SBRWGA's first Member/Member Tournament was held.  A high member turnout (80%) made for a fun event.  Team member, Jean Cheszek, took low gross of the field with a score of 79 in the Robson Challenge held at Eagles Nest Golf Club in Pebble Creek. The 2016 Ryder Cup Captains were  Mary Snowden and Brenda Armenia.

2015
SBRWGA exchanged with Mountainview/Preserve for its first Home and Away.  20 members participated in the Ryder Cup 2-day team competition held in March. SBRWGA’s team finishes fourth in the Robson Challenge at Robson Ranch.  Our first Ryder Cup Captains were Connie Klappenbach and Colleen Carey.

2014
Our first official webmaster, Alexandra Anna was instrumental in launching the official website for the league: sbrwga.com.  Sadie Hawkins Invitational added as a new special event. SBRWGA participated in the Robson Challenge where the 12-member team tied for fourth place.

2013
President’s Cup low net tournament is inaugurated in February.  Brenda Armenia was the event’s winner and a perpetual plaque was initiated.  Executive Board writes the By-Laws that are officially adopted by membership in September.  SBRWGA hosted AWGA Rules of Golf and USGA Handicap seminar at SaddleBrooke Ranch.

2012
Jeanne Hardiman wins the first Club Championship scoring low gross in the 2-day tournament.
October 23 SBRWGA Kick-off Meeting with 13 members present.  While general meetings were held in the Hacienda Club, most event luncheons were hosted by members in their homes for several years.

2011
November 2 - Informal meeting of SaddleBrooke Ranch women interested in organizing to form a golf association.  Colleen Carey volunteered to serve as chair for the new group."
The Original Board 2012 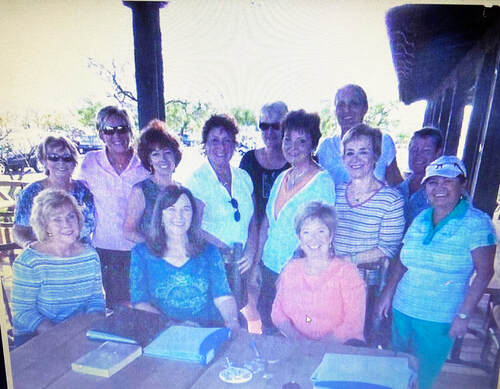